The Spring action is here, folks! This means the return of the bait schools on the reef and plenty of species to feed upon them. We expect the sailfish bite to continue to be solid as we have had a nice north current the past few days. The action on the reefs and bottom fishing is red-hot! NOW is the time to book your saltwater fishing adventure with Fantastic Fishing! 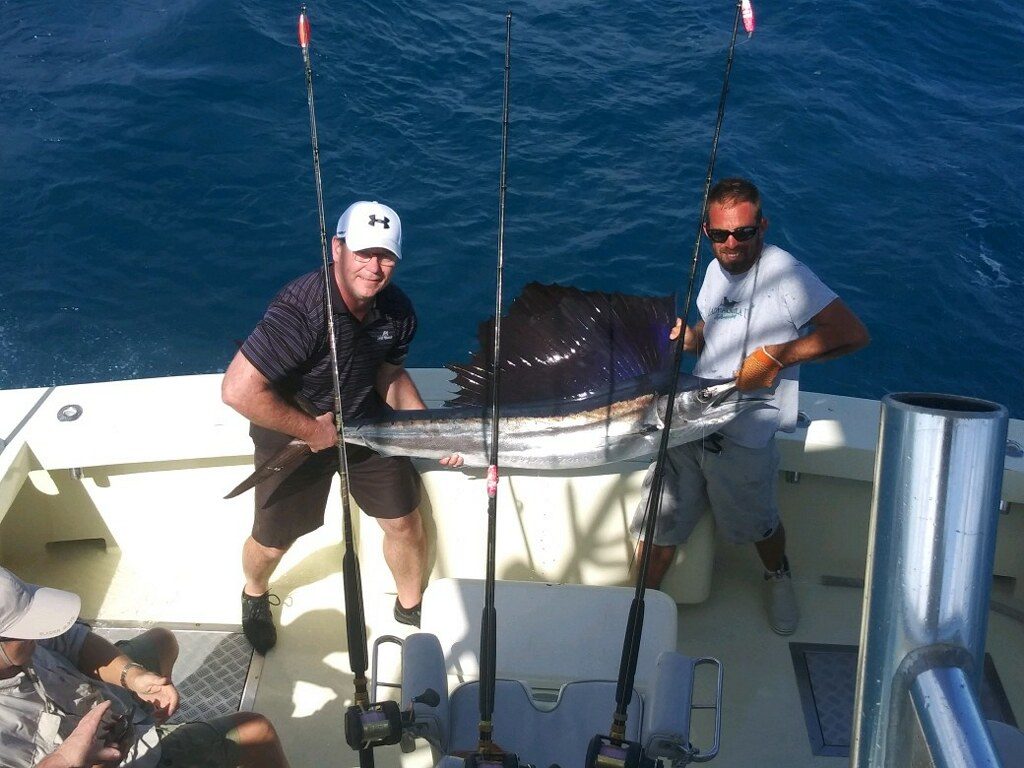 The Sailfish continue to stay in the area and the roving pods of Sails are feasting on nearly every bait that we throw at them! Our clients have been catching and releasing large numbers of Sailfish as we fish live baits underneath our fishing kites or on the troll.

Kite-fishing is our specialty at Fantastic Fishing. Nothing gets the blood pumping like watching a double- or triple-header Sailfish bite up on the surface.We can fish up to three (3) live baits per kite, with at least two (2) kites up at any one time. We’re fishing between 80 and 200 feet of water.

When there is not enough wind to keep the kites in the air, we can also slow troll live baits such as Pilchards, Ballyhoo, Blue Runners and Goggle Eyes as well as troll our specially-crafted mullet strips.

The Kingfish and Wahoo are Making Noise

King Mackerel (‘Kingfish”) have also set up shop on and near the reefs to pounce on our unwary kite baits and trolled baits and they have only gotten thicker – and hungrier. Kingfish have teeth that are more like surgical scalpels and they fight hard, which is why we call them “smokers” – they will smoke your drag on scorching runs once they’re hooked. When they’re not crushing our live baits under the kite or slow-trolled, Kingfish have also been responding to our strip baits trolled below the surface on planers along with as Islanders with ballyhoo in both the blue/white and red/black color combinations. We’ve been finding the Kingfish in between 70 and 150 feet of water.

Wahoo are on the Scene

Wahoos have also shown up to crush our kite baits and our Kingfish baits trolled behind planers. The only thing better than the screaming drags and intense fights with Wahoo are how Wahoo taste on your dinner table!

Barracudas Don’t Want to be Left Out

While we’re on the reef targeting Sailfish, Kingfish and other species, another toothy monster has a knack for blowing up our kite baits and trolled baits: Barracuda! These fearsome-looking critters are tough, acrobatic fighters that refuse to be ignored. Barracuda also make amazing replica mounts.

The Grouper and Snappers are Frisky

With the recent full moon, the bottom fishing has been exceptional. We’ve been keeping our clients busy catching fish and sending them home with tasty dinner fare. Get a look at this huge Black Grouper!

Snappers or multiple varieties are also on the bite and stuffing our fish boxes.

When we visit our “honey hole” wrecks, our anglers have been “greeted: by slugger Amberjacks like the one below.

Our April trips are filling up fast as families visit us for Spring Break and May dates are getting scooped up. Give us a call to book your FANTASTIC trip now!

Love was in the air for all of February because we at Fantastic Fishing LOVE catching and releasing Sailfish! Wahoo, King Mackerel and big Sharks continue to make guest appearances to keep line peeling and drags screaming.

The world-famous Sailfish action has never been better and we’ve been guiding our clients to double-, triple- and event quadruple-headers when fishing live baits offshore. The recent January cold fronts have kept the Sailfish down south and that’s just where we want them. We continue to catch multiple Sailfish on live Goggle Eyes or Pilchards suspended below our fishing kites.

As we like to remind everyone, South Florida is the birthplace of kite fishing and nobody does it better than the pros at Fantastic Sportfishing. We’ve been catching Sailfish anywhere from 70 feet out to 250 feet of water. When there is not enough wind to keep the kites in the air, we’ve also had success catching Sailfish by slow-trolling live  Ballyhoo or Goggle Eyes on the surface and just below the surface.

Here at Fantastic Fishing, we believe in a sustained fishery. That’s why every Sailfish caught is tagged and released so that researchers can further study their travel and feeding habits. We do everything we can to ensure that these majestic and acrobatic fish can be enjoyed by future generations of anglers.

Wahoo and King Mackerel have been active on the reefs inside of 300 feet of water and have been sneaking up on our live baits while Sailfishing. We’re catching Wahoo and Kingifish in the 10 to 30-pound range either on our Sailfish baits or on the troll with bonito strips, mullet strips, lures and feathers trolled below the surface on planers.

Huge Barracudas have gathered above the reefs for their own dating game, looking for unwary prey. They have been pouncing on our live baits and trolled baits.

The shark fishing continues to be hot. The Hammerheads are showing up under our kite baits just like the rest of the species we like to catch. We also continue to tangle with Silky Sharks, Blacktips, Spinner Sharks and the occasional Big Bully: Bullsharks. We’re targeting the sharks on certain humps and wrecks with live and dead Bonitos. If you’ve ever wished to catch a big Shark, let’s go! Now is the time to schedule your trip with us!

Fishing is like a box of chocolates: you never know what you’re gonna get. Check out this African Pompano that our clients caught. This is a rare but pleasant treat. Way to go!

The remainder of February is nearly booked and our March slots are filling up as the Spring action is just around the corner. Give us a call to book your FANTASTIC trip now!